“Turn Your Musky ‘Follows’ Into ‘Takers’

Musky fishing can be a funny game. An angler can spend many hours beating the water to a froth, only to have a musky finally appear, lazily trailing the bait then slowly disappearing out of sight.

Musky follows are a common occurrence when chasing this majestic beast, however, there are a few tricks that can be utilized to turn those curious fish into solid takers. Try these tips when out on your next hunt and get ready to land your fair share of braggin’ size ‘skies.

Throw a Change-Up
Tossing a different lure to a following fish is one way of attracting their attention and hopefully convincing them to bite. The one key ingredient to make this technique work is to throw an entirely different lure, both in style and colour. For instance, if you get a follow from a fish while throwing a bucktail, immediately throw a topwater lure back to the direction that the follow originated. If your bucktail happened to be black, try a white or silver topwater for contrast. The key point is to make your lure presentation entirely different. Fish that follow baits to the boat are usually semi-interested in what they perceive as a meal. By changing-up your bait and immediately knocking on their door again, a positive reaction can usually be garnered from that same wandering fish.

Throwing back a different bait is a technique that must be done immediately after a fish is spotted for it to be effective at all. Having at least two rods in the boat, both rigged with opposite lures, will make this task easier for the angler to utilize. Keep the second rod within arms reach and be on the lookout for that next following fish.

Change Your Retrieve
For many anglers, seeing a following fish can be an exciting yet also disappointing sight out on the water. Watching a fish trail your bait from twenty feet away right to the side of the boat can be downright frustrating. For those fish that follow for long distances, there is a certain trick that can put the odds back in your favour. 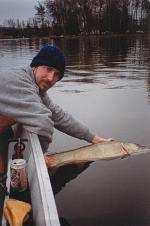 Adjusting or changing your retrieve is one of the best tricks for long-range follows. These fish are especially curious but lack the aggression due to the monotony of the bait action. Putting a little “zing” into that bait is just the ticket for changing their minds.

Speeding up your retrieve is probably the best adjustment that can be made to provoke a strike. When a following fish is spotted, suddenly accelerate your bait and work it all the way back to the boat in this manner. If you’re using a bucktail, burn it in as fast as you can turn the handle. For topwater the same holds true. Jerkbaits are a little different as you are best to use more aggressive pulls and jerks while bringing the bait back to the boat quicker.

Another interesting technique is to change the direction of your lure. This can be easily accomplished by turning your rod in a forty-five or ninety degree angle. Instead of your bait running in a perfectly straight line, this slight adjustment will change the angle that your bait makes back to the boat. The majority of time, a following fish will strike at the exact moment your bait changes course, so hold on and be prepared to set the hook hard.

Figure-Eights
Figure-eighting is a term used to describe a boat side technique for following fish. It is quite simple to do and the rewards can be great. When a fish is spotted following your bait to the boat, thrust you rod tip under the surface while your lure is still in the water. In a controlled and seamless motion, begin working your bait in a “figure-eight” motion in the water. This tactic should be used while your lure is approximately three to four- feet from the rod tip and maintained at two to three-feet below the surface.

Working a big figure eight, or a large circle in the water are both effective but the motion must be fluid and constant for the tactic to be successful. (Refrain from “drawing” tight circles or “eights” in the water, as the fish will not be able to turn quick enough.)

Don’t be surprised to see following muskies turning in fast circles while chasing the bait, before finally hitting out of sheer aggression. Boat side figure-eights are a dynamite action for following fish, and are also productive when done after each “follow-less” cast in case the fish is holding deep and out of sight.

Figure-eights are done most easily while using bucktails, as the lure shape and design allows for easy manipulation in this manner. Jerkbaits can also be used in this technique at the end of a cast, as long as you do not allow the bait to rise to the surface. Try to keep the lure down at the depth it was running during the initial follow for added effectiveness.

Following muskies are part and parcel of hunting for the “kings of the freshwater.” Although they can be frustrating while working the water, followers can be turned into takers quite successfully when utilizing the above tips and techniques when out on the water.