There are still folks out there, who it appears… will never learn… but the value and effectiveness of catch and release angling is continually becoming more evident and accepted as a valuable tool in maintaining or improving the quality of fishing. Whether it be voluntary, or mandatory via regulation, seemingly endless examples of rebounding fisheries with respect to a variety of species are available. 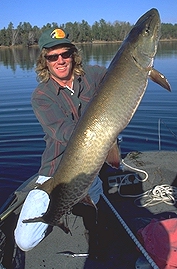 In the northern zone, musky fishers were the first to really practice release in force. And this was in part due to necessity, since fish at the top of the food chain are present in the lowest densities; evidence of over-harvest shows up quickly, while rebounding generally requires far more time than the damage period. Catch and release fishing with selective harvest is necessary for all species though, especially if any “quality” (larger fish) is to be maintained. Simply put, larger, adult fish need to be protected.

So catch and release is good… and necessary. Taking things a step further though, there’s the issue of whether or not release is actually effective all the time. Simply putting a fish back in the water… sometime following its capture, doesn’t assure survival. It’s a simple conclusion: if the fish doesn’t live, nothing is gained. Knowledge and execution of proper release practices is vital.

First realize the major handling factors that contribute to unintentional mortality: deep hooking or hooks in vital areas (stomach, throat, gills or eyes), slime removal, time out of water and stress. Stress is the final factor mentioned, and while the previously mentioned issues all contribute to it in some form, minimizing stress is ultimately the most important. The “fight time” is a huge contributing factor in stress; one that few fishers consider in the big picture. If release is the intention, it is of tremendous importance to minimize the period of time between strike and release. 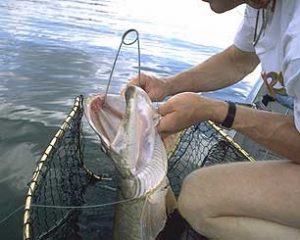 Too many folks still like to have “fun” with the fish they are fighting, allowing it to flounder around far longer than is necessary to land and release it. It is also common for folks to use tackle that is basically too light to handle the target species, resulting in extended battles.

Switching topics here for a second, many folks go out angling without the necessary tools to properly handle releasing (a mere pittance in comparison to the price tag total on the other gear they tote). These tools are absolutely necessary to properly release large esocids (musky/pike): long-nose pliers and heavy-duty hook cutters are a must; not absolutely necessary but advisable are: spares of the aforementioned two, a “hookout” tool, a landing device, split-ring pliers and spare pre-sharpened hooks. 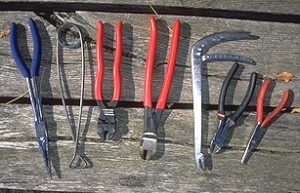 Pliers should be used when hooks are easily removable and not located in any vital area. When hooks are near vitals or deeply embedded (requiring time and possibly ripping/deforming), always use cutters to cut hooks away, making sure pieces fall out (cut in multiple pieces). Split-ring pliers and spare hooks are necessary for speedy hook replacement. A landing device is something some esox anglers don’t believe in, choosing rather, to handle all fish via water release…

This is because of good intentions-the idea being that the fish never comes out of the water at all, or very briefly. There are a select few (very experienced) who are able to handle water release well, but remember the importance of the “time” factor. In many cases, the release will be performed quicker using a landing device like a net or cradle. Fish can be subdued quicker by putting them in a net, and with a big net, the fish can be left over the side of the boat in water during the release process. The same is true of the cradle device, although these can be a little clumsier in landing and are nearly impossible to use alone. 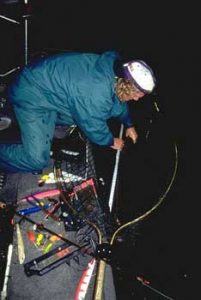 To get a hold on an esox in the water generally requires tiring them out further; now add in the danger of getting hooked by a thrashing fish with a multiple hooked lure in its mouth, and more time is required. A net allows the quickest landing of a big fish. Loose hooks that may end up in a hand or back into the fish causing further damage, end up secured to meshing, basically out-of-play.

Nets have received a bad rap over the years as a landing device. A big reason is because many folks have gotten used to netting a fish and then bringing it into the boat… where it flops around, beating itself up, splitting fins and removing slime. And this is a disaster. Don’t do it.

Left over the side of the boat in the water, the net is an efficient tool. There is some potential for fin-splitting though, but this has been greatly reduced in recent years by use of knotless, treated mesh developed by Frabill for their big landing nets. The good points of a “quality” landing device easily outweigh the bad: the fish is quickly subdued, stays in the water, hook removal is safer for fish and fisher; with experience, it is accomplished quicker than water releases.

Frabill currently has a Power Catch net for esox and super-size net called the Big Kahuna for true trophy seekers. They also will likely be reintroducing the Kwik Kradle, which a cradle/net hybrid that is very fish friendly.

So net the fish head first and lift to secure it. But DON’T bring it in the boat. Just bring the rim of the net to the gunnel. Now the fish is still in the water, yet subdued, and it can stretch out its full length and breath properly. It’s easy and safe to either remove hooks via pliers or cut them free. Now the fish can be measured as it lays in the water with a floating ruler. From here the fish can be quickly held up over the water for a photo, or simply let out of the landing device to swim off … hopefully snapping a few release shots.

Having the proper tools and a gameplan is of the utmost importance. Everyone in the boat should know where the tools are and how to use them. Cameras should be ready to go too, so there are no delays. The importance of speed and efficiency can’t be stressed enough. To date, not enough emphasis on minimizing time has been offered. Of all the issues, this simple one is most important. The warmer the water temperature, the more fish are susceptible to stress-related mortality. Take extra care to be quick during the summer months.

Also consider, that the larger the fish is, the less resilient they are. No fish in the system is more valuable than adult females (the trophies we are all ultimately after). Remember the importance of getting these fish back alive. In these modern days of beautiful reproductions, keeping of these fish for mounting purposes is completely unnecessary. These big girls are the ones that consistently get overhandled, simply because most folks want to treasure the moment and maybe get a few extra photos. Ultimately, time out of the water should be limited to no more than 20 seconds and hopefully far less. It’s no problem with today’s cameras … have the tools-and a plan