Trolling for musky is a productive tactic throughout the season, but it is in the fall when this method lives up to its reputation: big musky! 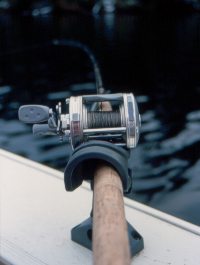 Trolling for musky is a productive tactic throughout the season, but it is in the fall when this method lives up to its reputation: big musky! As water bodies cool and fish put on the feed bag, trolling deep-diving crankbaits is an excellent technique for increasing your chances of landing a trophy. Understanding fall musky behavior, using a strategy to target deep fish, and having proper equipment are three critical components to fall fishing success.

FALL MUSKY TRANSITION
First, in large bodies of water from post-spawn to late summer, let us divide musky into two categories: shallow and deep fish. Granted, separating musky location into two extremes is a simplification, but it will help explain the fall transition. Shallow fish inhabit depths to 15 feet, occupying structures like weedy bays and points. The other fish relate to deep structure, like rocky reefs, and feed on baitfish, such as cisco, in open water.
Fall trolling is productive because many fish move from shallow, summer haunts to deeper water. One reason the change occurs is that decaying vegetation no longer produces oxygen or provides shelter, reducing its ability to hold forage. This results in fish abandoning shallow, weedy structure and relating with the breakline, rocky structure and open water baitfish. Recognizing this change of shallow musky behavior and adjusting your fishing strategy will increase your fall catch percentage. Deep-diving crankbaits are perfect for fishing the fall transition.

TECHNIQUE
Trolling crankbaits deep is a different method than running shallow baits over deep water. The former is this article’s focus, although the latter can be a deadly technique as well. How deep you run your baits will depend on the structure you are fishing and where you have marked musky or baitfish. 20 feet is a good start and getting down to 30 feet or more can be productive over deep water.

The depth your baits will run is influenced by: the design of the bait itself, the speed of your troll, the amount of line out, and the line’s diameter and resistance. Knowing the bait’s running depth when trolling is critical, particularly when you have marked fish at a particular depth. Troll baits a few feet above these fish, as musky are more likely to rise to hit a trolled lure then dive to one.
One way to determine a crankbait’s running depth is moving progressively shallower at your anticipated trolling speed, usually between one to four miles per hour in the fall. Next, test your lure at boat side, ensuring it is running properly and adjust if required. Let out line and monitor the depth while trolling shallower until your crankbait begins to hit bottom. This method provides the bait’s general running depth. If not deep enough let out more line, increase speed, angle the rod tip higher, or change baits. Now that you know your bait’s depth you can start trolling.

First, identify structure to be covered by surveying a hydrographic map or exploring the lake with a depth finder. Once trolling, vary your speed and boat position; an excellent habit is to troll in S-curves. Do not be afraid to let your baits hit bottom, this produces noise, kicks up silt and often triggers strikes. Occasionally pumping the rod changes the lure’s action and can also prompt hits. Set your drag light when trolling. Boat speed usually sets the hook, and tight drags can lead to lost or broken equipment if you snag bottom or hook into a monster musky.

TACKLE
Heavy action rods from six to seven-and-a-half feet are needed to troll large baits. Baitcasting reels with large line capacity and a high gear ratio allows you to quickly land a musky. A reel with a line counter is good feature and a spool click alarm will alert you 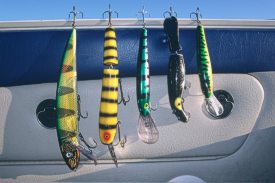 when you have a fish. Spool your reel with 60-to 80-pound-test line, and thin diameter lines, like super-braids, allow your baits to run their deepest. Terminal tackle should include a 12 to 24 inch, heavy duty leader with a good quality swivel and a strong, locking snap. Many tackle shops have leaders’ specific for musky fishing.
There are a variety of crankbaits on the market. Choose baits starting at nine inches, in straight and jointed varieties with natural and hot patterns. Heavy duty rod holders will reduce arm strain. Ensure you have proper tools, as well as knowledge, for properly landing and releasing musky. Finally, dress for cold temperatures and be prepared-an extra pair of gloves can go a long way!

In October and November when many anglers are storing their boats, musky anglers are reeling in trophies. Trolling deep-diving crankbaits is an excellent strategy for targeting deep water fish.

So, instead of putting your boat away try trolling for fall musky. You will likely be amazed at your results.